On Monday, June 1st, 2020, Christian Mbanza was momentarily locked out of his car.

The 27-year-old grade-school teacher of Regina, Saskatchewan used an app to unlock his car. He waited for his phone to work for a moment, and when it didn’t, simply got out his keys. Nothing about the incident should have implied Mbanza was breaking the law when he was simply entering his own car, so why did a video taken by a neighbouring resident, captioned “Just happened on Keller ave watched the whole thing happen lock your doors!!” end up on the Greens on Gardiner Facebook group? Well, Mbanza is Black.

“If I was somebody with a lighter skin complexion, the results would have been different. I don’t think they would have automatically assumed that I was stealing,” Mbanza said in an interview with CBC. He went on to express that “I’m lucky that it just ended up on Facebook,” noting that things could have ended badly if he had lived somewhere else.

This seems to be a common sentiment in Canada. Many are tweeting variations of a 2013 Robin Williams quote in regard to the country: “You are like a really nice apartment over a meth lab.” The implication being that Canada is innocent compared to what goes on in the States. But anyone who believes Canada to be innocent in regards to racism is sadly fooled. Yes, Canada is known as a friendly country. But the truth is we wear syrup-sweet smiles to cover up our genocidal history and violent present.

Indigenous people occupied North America for thousands of years before European settlers arrived, bringing with them venereal disease, alcoholism, and business schemes. This weakened the Indigenous way of life, as they were not accustomed to any of this. It wasn’t long before the Indian Act was put forth in 1876, which was based on the premise that it was the Crown’s responsibility to care for and protect the interests of First Nations (the Indigenous peoples of Canada), when in reality it was largely concerned with the assimilation and “civilization” of First Nations. In 1883, residential schools were put forth as a method to further assimilate Indigenous children. These children were taken from their homes and enrolled in these residential schools, where they were forced to abandon their traditional language, dress, and lifestyle. More than 150,000 First Nations, Métis and Inuit children were placed in these schools and over 6,000 were killed, making the odds of dying in a residential school more likely than the odds of dying in World War II. Many survivors of these schools were subjected to verbal, physical and psychological abuse, which is a major cause of substance abuse and intergenerational trauma; this practice continued until the last residential school closed in  1996.

Stephanie Pierce graduated from high school in Moose Jaw, Saskatchewan in 2018. It wasn’t until she enrolled in her school’s Native Studies course at the age of 16 that she learned of the severity of Canada’s treatment of Indigenous people. She recalls being shocked about the Sixties Scoop, which was a practice in the 1960’s that involved the RCMP “scooping up” Indigenous children from their parents and putting them up for adoption, usually to middle-upper class white families.

“We actually had someone who was a survivor of the Sixties Scoop come in and talk to us,” Pierce recalls. “She said she had no clue the true background of her adoption until the earlier 2000’s, and her adoptive mom didn’t know either.”

“When her biological mom gave birth to her in a hospital, people came in – I assume the RCMP – and took her away, and basically said she was too unfit to be a mother.”

Taking Native Studies was a life changing experience for Pierce. Unfortunately, the class is optional and is only offered when enough students show interest, meaning that an important education often comes far too late – or not at all.

Modern Canadian racism might not be particularly evident to someone who hasn’t experienced it, but it exists all the same. As of 2018, the federal government reported that 91 First Nations communities (excluding those in British Columbia and those without access to drinking water at all) were under long term drinking water advisories. Indigenous people make up 4.8% of Canada’s population but were one third of the victims shot by the RCMP between 2007 and 2017.  The tragedy of missing and murdered Indigenous women has been declared a national crisis, and yet a proper number cannot be estimated because Canada did not keep a database for missing people until 2010, but since 1980 that number is estimated to be in the thousands.

As evidenced by Mbanza’s experience, racism isn’t exclusively directed at Indigenous people in Canada. The black community makes up 3.4% of Canada’s population and 9% of police fatalities. Black people in Toronto are 20 times more likely to be shot dead by the police than people who are not black. 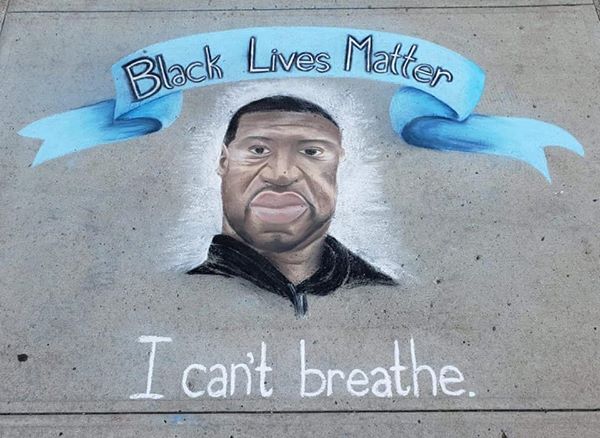 (Above) A mural in remembrance of George Floyd, by Regina teenager Zoe Stradeski.

As peaceful protests break out across the country and #blacklivesmatter trends across multiple social media platforms, it may appear that people are making meaningful steps towards change. However, this movement is more than a trend. Black lives and other marginalized lives need to continue to be listened to and protected going forward. Calgarian Twitter user @deborahmeb expressed her lived experience in a series of tweets.

Part of this shock is not actually appreciation but rather an indictment…It’s a ‘Where have y’all been this whole time?’ Before this week, FAR too many of you have been far too silent. I realize that before this week, I felt extremely alone in this.

If you are truly ready to change that, my gratitude cannot be fully expressed. If you will commit to care for black lives, fight for black lives, to do the necessary learning to value black lives beyond this current moment, you will be doing a noble thing.” She then goes on to “Implore you to stand up for Indigenous lives with the same vigour.”

To demand that a transparent investigation is held into the actions of the police officers present when Regis Korchinski-Paquet died, you can sign the petition here.

To demand racial data on police-involved deaths in Canada, you can sign the petition here.

To demand justice for George Floyd, you can sign the petition here.

To demand justice for Belly Mujinga, the railway worker who died from coronavirus after she was spat on by a man claiming to have COVID-19, you can sign the petition here.

To demand justice for Breonna Taylor, the Black emergency medical technician who was fatally shot in her apartment by the Louisville Metro Police Department, sign the petition here.

To demand that the city of Calgary holds a public consultation on systemic racism, sign the petition here.

To demand that Toronto police wear and turn on body cameras when on duty, sign the petition here.

Donate to Justice For Regis.

Donate to Belly Mujinga’s family, including her daughter.

Donate to the Toronto Protestor Bail Fund, which provides legal support to anyone protesting in Toronto.

Donate to The Minnesota Freedom Fund, which provides funds to pay bail for those protesting in Minnesota.

Donate to The Bail Project, which provides funds to pay bail for those who have been arrested during the protests. You can split your donation between the 39 bail funds (including the Philadelphia Bail Fund, the LGBTQ Freedom Fund, the Community Justice Exchange National Bail Fund Network and the Mississippi Bail Fund Collective) by clicking here.

Donate to the National Bail Fund Network, which includes a directory of community bail funds.

Donate to The Movement For Black Lives, a global initiative which aims to support Black organizations to conduct conversations about current political conditions.

Donate to North Star Health Collective, which coordinates and provides healthcare services, resources, and training to those protesting in Minnesota.

Donate to Unicorn Riot, which supports journalists on the front line.

Donate to Reclaim The Block, a grassroots organization that works to provide the Minneapolis community with the resources they need to thrive.

Donate to Say Her Name, a campaign that calls attention to police violence against Black women, girls, and femmes.

Donate to Justice For David McAtee, a Black restaurant worker killed by police in Kentucky.

Donate to I Run with Maud: an Ahmaud Arbery fund by his best friend.

So you want to talk about race – Ijeoma Oluo

How to be an Antiracist – Ibram X. Kendi

The Hate U Give – Angie Thomas