When gyms are closed and working out with your friends is not an option, what do you do? For myself and other students at my university, twice a week, we are treated to Zoom Yoga by my friend Melanie Adams. Adams, a certified instructor-led a power hour yoga class every Monday while school was still in session. Melanie’s goal is, “to provide yoga to other people in a high quality and accessible way.” Her classes are often the first time a student is exposed to a structured yoga regiment. For those who do not have access to a structured fitness program, yoga is a great way to dip your toe into exercising.

Many college students are drawn to yoga because of its accessibility and lack of equipment. Many people equate exercising with using big fancy machines or running for miles on end. With yoga, all you need is yourself and a small amount of space around you. Due to this, yoga is a highly accessible recreational and athletic option for many students and adults!

Melanie’s classes allow students both new and old to stretch out, relax, and become one with the universe. As someone who flexibility is close to zero, having a chance to stretch out each week was a great weight off my shoulders. In addition to taking the weight off my shoulders,yoga has strengthened both my muscles and my endurance, traits that are important for my primary sport; Karate.. For those still in school, yoga has benefits between different athletic fields. For instance yoga promotes flexibility in your muscles which are beneficial to those who are involved in projectile sports such as throwing basketballs, baseballs or any sort of flying object. 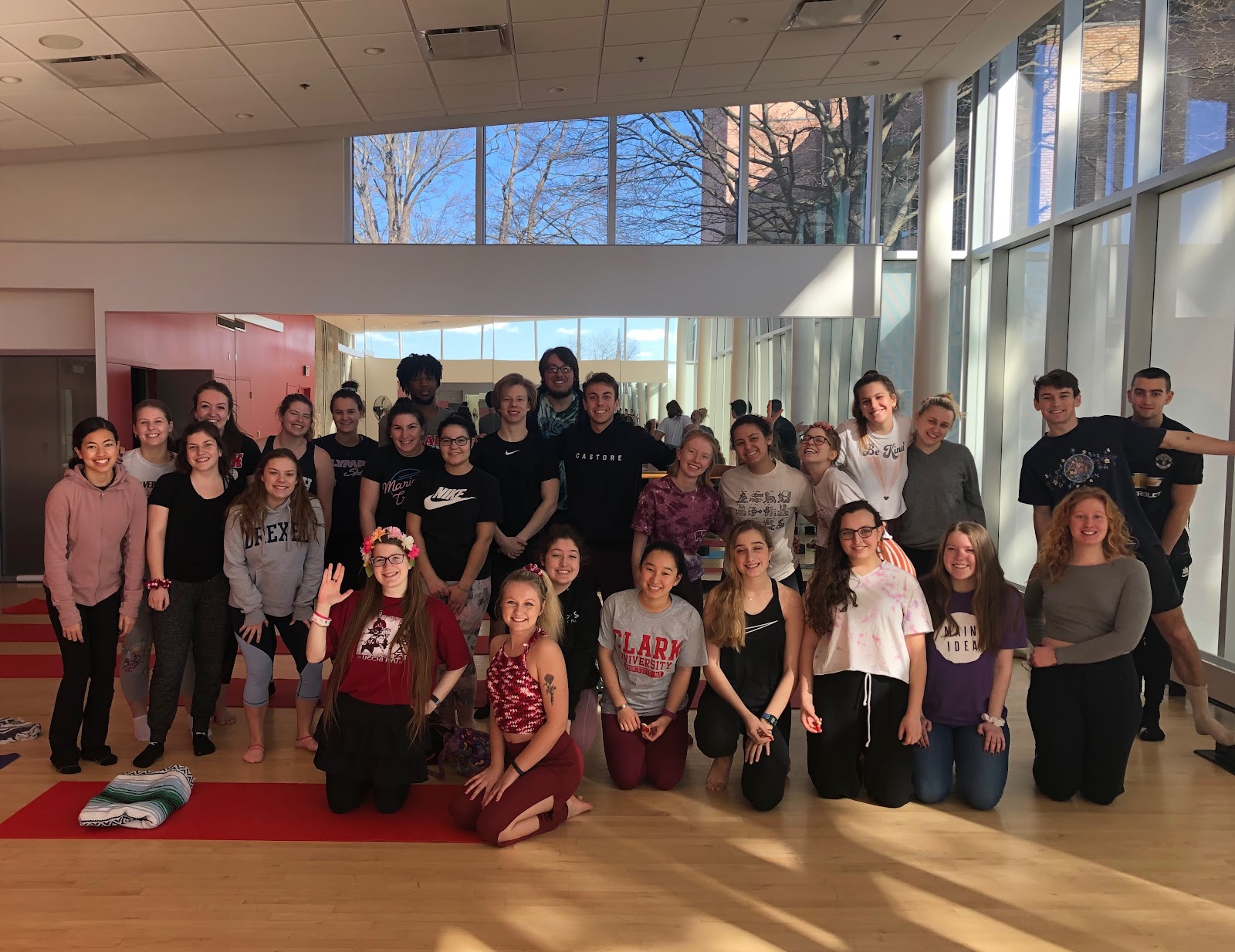 Melanie Adams’ class poses for a picture before class lets out for Spring Break. Adams (Front and center) has been leading classes at Clark University since September. (Photo Credits to Melanie Adams)

Adams began her yoga journey, taking her first yoga class in high school. It was there where she found herself connecting with her teacher Casey on a deep level. [add some description]“My teacher, her name was Casey and I have been practicing with her for almost five years now. She has really inspired me over the years through her teachings and having a relationship with her,” said Adams. Through her relationship with her teacher, Adams began to think about her future in yoga. The summer before Freshman year, she found herself hunting for opportunities for certification. Eventually, after surfing the web, Melanie took the biggest leap of her life so far; investing $3,000 of her own money into becoming certified as a yoga instructor. 200 hours of yoga training later, Adams walks out with her own certification to teach.

When students received the notice that Clark University was moving online and all athletic programming was being suspended, Melanie sensed a problem. Many students that attended her class throughout the school year had no access to yoga from home. In addition, she was concerned that the connections she had made with her yoga students throughout the year would fade away “I had certain student relationships with the people who came to my classes every week, and I was worried about when school was closed having those relationships put on hold, so I started teaching the classes on zoom so that I could still have a weekly connection and still be a part of those peoples wellness routines even though it is in a much different way,” said Adams

Now, Melanie hosts yoga sessions twice a week for students who are interested in continuing their weekly stretch-out. On Mondays, it’s Happy Hour Flow (Destressing), and on Wednesdays, it’s Rest and Restore (Finding Your Inner Self).

As she has transitioned to online yoga, Adams has found that it helps her keep a connection to those who have attended her classes in the past. While zoom powers this connection, online classes only go so far. Adams laments that some participants have their cameras and microphones muted so that she can’t make sure they are properly following along. She also has found that she can’t be as emotionally invested in her classes as she was back in school.

“I feel like I can’t get as emotionally themed in my classes because I don’t know whether people have a place to work it out after class is over. I have to find the balance between talking about real issues and knowing it could trigger someone to have a worse experience after class and not being able to help,” said Adams

Adams leads a free yoga class near her home in Massachusetts. (Photo credits to Melanie Adams)
For now, as we all sit in isolation, at least for a few days a week, we can stretch out, relax, and pretend that the entire world isn’t falling to pieces around us. If you are interested in joining Melanie’s class, it is every Monday at 5 pm Eastern Standard Time and Wednesdays at 7 pm Eastern Standard Time. For those who want to get their stretch on, here is the link to the classes! Zoom link: https://zoom.us/j/9697543823 and the access code for the room is  969-754-3823.